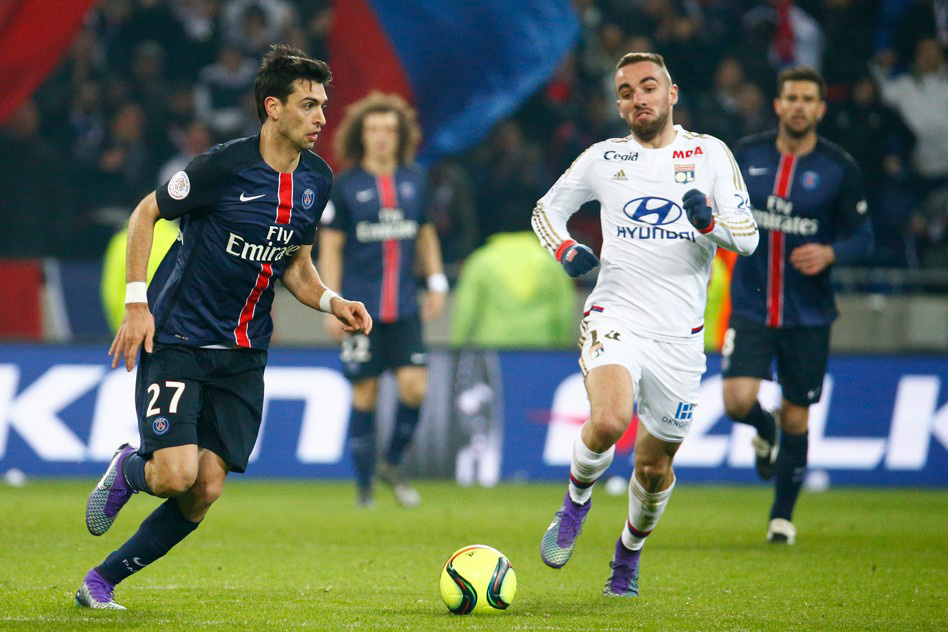 The scoreline makes the game seem closer than it was in actuality. In fact, an argument could surely be made that 2-0 would have been a more pleasing result than 2-1, such that Parisian fans wouldn’t have ever gotten their hopes up. In truth, Lyon could have, and should have, scored more. Kevin Trapp’s sojourns out of his box spared his team a few embarrassing moments, but the victory Sunday night was complete. No hiding it—the first half was likely the worst this team has ever played post-Carlo Ancelotti, even worse than the abysmal games versus FC Nantes and SC Bastia last year. Nasser Al-Khelaifi and Laurent Blanc are both honest and humble about the defeat; the least the fans can do is reflect that.

The first issue comes with the starting lineup. Deprived of Angel Di Maria up-front due to injury, Paris opted for the predicted front three of Edinson Cavani, Zlatan Ibrahimovic, and Lucas Moura. In defense, Blanc chose a fairly reasonable first-team setup of Maxwell, David Luiz, Thiago Silva, and Gregory van der Wiel. The only conspicuous element here is the absence of Marquinhos, but otherwise a team generally worthy of the task ahead. In midfield, though, the much-maligned trio of Adrien Rabiot, Thiago Motta, and Benjamin Stambouli proved a recipe for disaster. Paris have shown recently that their greatest strength by far lies in midfield. No team can hope to keep up a fantastic defensive record without a midfield that can consistently exist—that is, perform the basic duties in the middle of the park, ball retention and pressing included. Stambouli and Rabiot, both defensively-minded but capable of playing box-to-box in a pinch, partnered with an anchor man in Motta proved to be able to do neither.

The result was absolute chaos. Paris’ early wide-play was repeatedly cut out by hard Lyon tackles and a suffocating team press, with both Lucas and van der Wiel finding their early runs completely supressed. Ibrahimovic could only come deep to retain the ball, while Cavani frequently found himself reliving the glory days in Palermo as he was stuck at wing-back.

Lyon carved though a nonexistent Parisian midfield like a knife through a very complacent stick of butter. Sergi Darder squandered an early chance, nearly 4-on-4, by shooting when he could have passed to anyone. Blanc’s unwavering philosophy of playing it out of the back and out of trouble, seemingly only overwritten on the whims of Di Maria and Javier Pastore, was completely incompatible with the game. Stambouli managed a pathetic 29 touches in midfield, although one must point fingers at Blanc for deploying him in an advanced role in the first place. Motta was left with no proper midfield partner, completely isolated under pressure and unable to cope, while a sluggish defense often passed it straight to the opposition. In particular, van der Wiel’s errant balls and poor tackles frequently led to even more trouble for Paris.

While tempting to point fingers at the Dutchman as primarily at fault for Maxwell Cornet’s 13th minute goal, Lyon deserved every chance they got. Paris were torn to pieces in midfield and at times I wondered if PSG were down a man or two. Lyon would win the ball up the pitch and immediately surge forward with four or even five players in support, while Paris’ sad attempts to move the ball through the middle were quickly choked out. On the wings, Lyon simply eviscerated their opponents, with Darder and Cornet repeatedly getting the better of their full-back counterparts. The misery could have been quickly compounded just moments afterward, as a free kick delivered into the box nearly bundled its way into the net off Thiago Silva’s arm.

Silva, on his part, delivered probably his worst game of the year. The captain’s centennial league appearance for the club was just one of many milestones on the night—Paris also stood to break the unbeaten record for games in one season, as their run of 36 games unbeaten stretched back to last season, and of course the tantalizing prospect of an invincible season. Silva certainly did not rise to the pressure. That’s not to say he was even the worst of the back line—Luiz’ passing was miles below his usual standard, van der Wiel was repeatedly made a fool of, Maxwell was for once not so much qualite filtre. The back line was also completely let down by Blanc’s choice of midfield. That said, the captain did crumble under the pressure of his 100th appearance in a PSG shirt, and the occasion will not be one to celebrate, nor will his clear blunder in the buildup to Lyon’s second be forgotten. Dunga will certainly feel vindicated.

Speaking of crumbling under pressure without speaking of Thiago Motta would be a crime, however. The cracks did not just show in his play, where the absence of pacemaker Marco Verratti and muscle Blaise Matuidi clearly hurt him. The Italy international should have been sent off for a clear punch on Jordan Ferri, one of several players who repeatedly gave him trouble. He only received a yellow card from referee Lionel Jaffredo, who, coincidentally, officiated the last league loss Paris suffered.

All in all, despite one spell of possession around the 34th minute, the match fit the usual mold of waiting for Paris to wake up and get going, as it were. Only on the brink of halftime, when Sergi Darder scored his brilliant effort, did it really seem like Paris were sinking without trace. The goal is sort of a microcosm of the game, really. One half brilliance from Lyon, and one half pathetic lack of effort from the Rouge-et-Bleu. Luiz caught hopelessly out of position and yet not closing down at all, and Rafael allowed to roam completely free—how does one defend that? A fitting end to perhaps the first worst half since 2011.

Javier Pastore’s halftime entry sparked a glimmer of hope for PSG (and indeed the footballing world). It was his grit and iron that teed up Lucas to smash home a consolation goal in just the 51st minute—plenty of time left for Paris to get back in the game, although again, the loss of that hope at the end of 90 minutes will likely hurt more than a complete thrashing would have.

Pastore’s contributions led to most of PSG’s momentum in the rest of the game, and while great to see him responding well after an injury layoff, he probably wasn’t the savior Paris needed this game. Make no mistake, putting him on was the best possible move, but what’s bizarre is that Blanc held off to bring on Blaise Matuidi until nearly the very end of the game. Motta struggled with a lack of competent steel in midfield, and Pastore’s pass completion percentage is usually hovering around 70-80 by nature. The reason players like Juan Roman Riquelme (a player Pastore adores) fell out of style in the face of modern pressing, possession-based systems is simply that a stationary player that primary exists to lose the ball is generally anathema to that philosophy. Players in a similar mold such as Juan Mata are frequently pushed up the pitch or out wide in order to accomodate a more stable midfield, while those like Luka Modric can adapt their game in a deeper role, or roam out of position to compensate for being the primary target. Pastore fits into the latter mold, but in this case the rest of his team lacked the steel necessary. Had Matuidi come on for Adrien Rabiot in the 45th minute, perhaps there would be a different story.

Nevertheless, Pastore did his best to create, and Cavani squandered two good opportunities from the Argentine. El Matador usually has half a brain off the ball and far less on it, but frankly he displayed neither in a very muted display, likely down to the amount of time he spent in his own half chasing the ball. Ibrahimovic starved like a shriveled-up plant, and he did so little that one is almost tempted to bypass him completely in reviewing the game. The Swede will surely pick up more criticism for disappearing in a big game, but with generally no midfield to speak of and typically rocky chemistry with Pastore (the two frequently take up the same space on the pitch) one could have easily predicted the quiet game. He did score from one narrowly-offside opportunity but to blame the linesmen for the defeat would be more than petty.

Laurent Blanc: "Lyon walked all over us and we could not come up with a response."

No one should fume too hard about losing the invincible season, given that supposed rivals Lyon are thirty points behind first-place Paris, but the wound stings nonetheless. The pain stems from the nature of the defeat, particularly the grinding final 15 minutes where Les Parisiens found their feet and struggled to break down a Lyon side that suddenly turned to playing with six at the back. Now concerns will turn to further domestic affairs: what is there to play for in Ligue 1 now, aside from sheer professionalism? The title is virtually won, and this loss is no setback. If the players don’t have the prospect of invincibility to urge them on, one must worry that this complacent, blundering affair may be the first of several lazy, pathetic games from the Parisians.

Blanc must learn from this game. This starting midfield should never again be attempted, and that’s much less a reactionary attitude than it seems—there have been 15 minute chunks of games where Blanc has hauled off his starters and left the team with these three on the pitch, and it has always been a disaster. If Stambouli plays, let him be in place of Motta; play Christopher Nkunku if a midfield playmaker is that sorely needed. The invincible run coming to an end may actually be a blessing in disguise for the U19s, whose talents like 17-year-old right-back Alec Georgen could see a run-out (sooner than later, if van der Wiel keeps performances like this up). Certainly they would be preferred in terms of effort. In this home stretch of domestic games, the team must realize that their opposition—even if they’ve been beaten 4 times already this season—always plays to their highest level.

Effort, more than anything, is what Paris lacked. Of the starters only Lucas and Trapp can be accused of attempting to actually defend the badge. The chairman will be fuming, the manager will be fuming, and the fans will be fuming at that. Not the loss, not the broken streak, but the sheer lack of effort. Even the absences of Angel Di Maria and Marco Verratti, whose imminent returns to fitness will be a gift from above, cannot excuse that. Harsh words will be had, and if Paris’ past is any precedent, AS Saint-Etienne will be in for a hard reaction come Wednesday’s Coupe de la Ligue final.