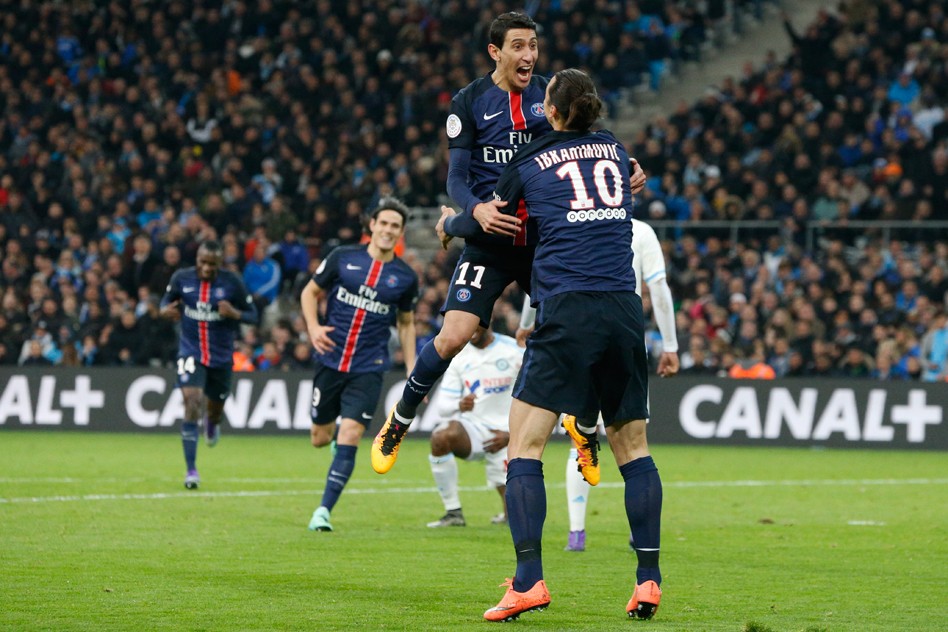 From the time their bus pulled up to the Stade Velodrome, Paris Saint-Germain knew they were in for a fight.

Marseille fans hurled missiles at the PSG bus as it arrived at the Vélodrome just moments ago. (Pic: @HenriGhnassia) pic.twitter.com/KZf6me6Ju1

Coming into the match, PSG were 32 points better than their rivals from the South and had not lost a league match in 33 games, but none of that mattered. Over 60,000 Marseille supporters made for an electric atmosphere and for the majority of the match, l’OM played like they were the ones at the top of the table.

Even after Zlatan Ibrahimovic opened the scoring in the second minute, his 21st of the Ligue 1 season, Míchel’s men battled back and were the superior team for long stretches. After Angel Di Maria nearly doubled the score after a sublime pass from Blaise Matuidi in the 10th minute, Marseille pressed forward and to be fair, should have scored at least one more goal. Thankfully for Paris though, they have Thiago Silva.

The Brazilian was clearly the man of the match and made multiple goal-saving tackles in front of Kevin Trapp. The concerning part is the fact Silva needed to make those saves—and blame should go to Adrien Rabiot and Thiago Motta, who continually let Lassana Diarra, Remy Cabella, and others make runs from the midfield and into dangerous attacking positions.

Cabella, Brice Dja Djedje, and Abdel Barrada all had their chances to test Trapp but the German keeper, with help from Silva, was up to the challenge. In the 25th minute, it was the former Newcastle man who sliced through the Paris midfield on a 50-yard run and spectacularly placed his shot between the legs of David Luiz and just past Trapp to tie the game at 1-1 and send the Velodrome into hysteria. As halftime approached, PSG remained under heavy fire and nearly went down a goal after Michy Batshuayi’s header was cleared off the line by Maxwell.

Given the chances Marseille had in the first 45, you would think PSG played poorly. Aside from the midfield, which clearly missed Marco Verratti and Javier Pastore, the team played well. Zlatan scored early, Silva was a beast, Matuidi’s work rate was impressive, and Di Maria linked up well with Lucas Moura.

After the break, Marseille kept their foot on the accelerator and attacked the PSG defense. It was almost like a FIFA 16 game where you keep your finger on turbo the entire time. It was only a matter of time until l’OM tired but it was up to Paris to keep the score at 1-1 and wait for their chance to counter.

In the 60th minute, Ibrahimovic had a chance to put PSG in the lead after a cross from Matuidi but he unbelievably missed a wide open net. With Marseille playing so well, I worried the big Swede wasted the best chance to secure the three points and win a ninth straight Classique. Thankfully, Di Maria came to the rescue.

The Argentine played in Ibrahimovic just outside the box and the Swede did well to keep the ball in bounds and away from Steve Mandanda. He returned the pass to Di Maria whose first touch was absolutely world class. After a defender flew by the Argentine fired a shot into the bottom corner of the net. The goal was a dream for Paris supporters and the relationship between Ibra and Di Maria appears to be everything we wanted Ibra/Cavani to be.

The match ended 2-1 to extend PSG’s unbeaten run to 34 and they now stand 24 points ahead of second place AS Monaco. With thirteen Ligue 1 matches remaining, talk of an undefeated season is starting to heat up.

I think if we continue like this, we can go through the entire season without loss. That’s not an objective, but if we can do it, it will be magnificent.—Thiago Silva

More important than an undefeated domestic season though is the UEFA Champions League, which returns February 16 at the Parc des Princes against Chelsea. Sunday’s match against Marseille could go a long way in preparing Paris Saint-Germain for one of their toughest tests of the season. Some would say the Parisians have coasted through most of the year but their rivals asked serious questions of their championship pedigree and in front of a hostile crowd you have to say they passed the test.