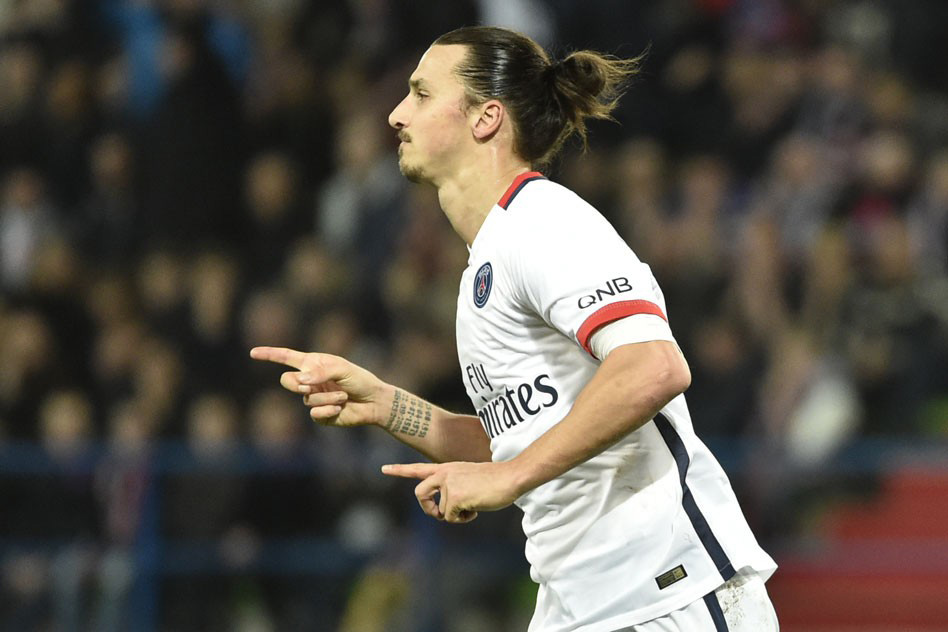 Paris Saint-Germain strolled to a 3-0 away victory over SM Caen in style and made history at the same time by setting a new record for mid-season points with 51, one better than Olympique Lyonnais’ 50 in 2006-07.

While victories over Ligue 1 teams seem to go with the territory for PSG, Caen are within reach of a Champions League place and did manage to get a draw at the Parc des Princes last February. Patrice Garande’s men have played solid football, with a good eye for the counter, and a decent defensive line. Hardly favorites, even at the Stade Michel d’Ornano, but not pushovers. Despite the perceived difficulty of the match, Les Parisiens went on to play some of the most decadent football of the season.

For the 60 minutes Thiago Motta remained on the pitch—afterward the tempo lowered quite a bit—Laurent Blanc’s men were immaculate in possession, crisp and inventive. They were the antithesis of the lazy bunch we saw against AS Saint-Etienne in the Coupe de la Ligue. Much of this was due to the return of the Italian duo to midfield. If Motta is the heart of this side, and it seems he indisputably is, then Marco Verratti is his pacemaker. There is a supernatural connection between the two, and with Il Gufetto back to full fitness, Motta can glide up the pitch and remain confident that he’s leaving no holes behind. Indeed, with the two of them on the pitch, the midfield often flattens out more than it does when Motta has to cover for the more defensively suspect Adrien Rabiot. The higher up the field Verratti is, the more danger he can cause and that aggression affects the entire squad. This cascades in innumerable ways, but we particularly see it when the fullbacks are allowed to advance while remaining well-covered and Angel Di Maria and Lucas Moura subsequently occupy roles just inside the touchline. This naturally trapped Caen within their own half, save for the occasional break. It’s shades of Barcelona, truly. It must be said that Blaise Matuidi, the usual midfield partner of the two Italians typically, isn’t guaranteed a spot in the starting XI as many would think. That said, while Rabiot is capable of deputizing from a technical standpoint, Matuidi is among the most defensively and physically capable in the squad. If we didn’t see much of him going forward against Caen, it’s because the attack had been entirely overhauled.

The attacking trio of Di Maria, Zlatan Ibrahimovic, and Lucas is one that is relatively untested, particularly in light of the contentious issue of Lucas as a starter versus as a substitute. Against Caen, though, the trio impressed me. It’s a combination of Di Maria finding more chemistry with his teammates by the day, Ibrahimovic having fully recovered from his injury, and Lucas back on his preferred flank. I’ve written previously that the inherent fluidity in the Parisian attack, when combined with Edinson Cavani shifted out wide, deprives Les Parisiens of an entire chunk of the pitch. It was a major contributor to Matuidi’s major drop in form, and the Uruguayan certainly doesn’t participate in the buildup play to the extent of many of his teammates, even if he does find the net. In the 5-1 win over Lyon, for example, Cavani registered 29 touches across 90 minutes. That’s the second-fewest touches of any player that game, and the fewest of anyone who wasn’t subbed off. Saturday’s attack was a revelation in fluidity. With AdM and Lucas on their natural touchlines, Ibrahimovic playing as a more traditional striker—still happy to drop back but not nearly as far as usual, which is why Matuidi stayed back in turn—Blanc’s men put on an absolute show. This was apparent from the very beginning, with Lucas beating the offside trap and nearly netting a goal in the second minute, and continued until he was subbed off.

The interplay between the three was magnificent, with both wingers technically proficient enough to drift inside and toward the touchline at any moment, and competent fullbacks potentially overlapping. We saw for the first time an attacking trident with all prongs actually functioning. It’s easy to throw your hands up and say Di Maria is just too good for Ligue 1—and you’re probably right, he is too good—but there was more to it than just his magic. Di Maria saves games like Saint-Etienne, where possession too often goes nowhere and he has to pull a killer ball to the far post out of his hat. It’s what last season I would have called “The Pastore Effect.” Meanwhile, earlier in the season, when El Fideo wasn’t fully integrated in the squad, every attack would come from Serge Aurier down the right. This fixture was one where all attackers were not only threatening goal, they created every chance. The first goal, seen above, may be mostly down to Aurier and Di Maria, but if you spot Lucas reacting to Aurier’s run, you can see he immediately falls back to the touchline to cover. This is just another advantage of having a proper wide man, particularly when your overlap is that dangerous. Di Maria doesn’t usually cover that space when on the right wing, preferring to come inside at every opportunity and risk exposing the right flank.

The above chaos in the box is just another example of the interplay, with Zlatan released by Di Maria and then Lucas scrambling to recreate the chance. The space just around the edge of the box is where the two wide men preferred to spend their time by default, particularly with both being just as comfortable in an attacking midfield role. This frees up Ibra for his trademark acrobatic strikes, although normally the big Swede would have put a better finish on it.

More linkup as Di Maria, again assuming the role of a left-sided #10, touches it to Lucas, whose intelligent run is well-covered. That doesn’t stop Ibrahimovic as he powers it into the net. It might be a wondergoal, but the Brazilian’s movement is astronomically improved from games such as Angers, where he seemed to be perpetually just a step in front of the defensive line. A good portion of his job as a wide man is to be threatening off the ball, and with Verratti and Aurier surrounding him, Lucas absolutely did that against Caen. He may only have one “proper” assist to his name, but his contribution to overall play was, for me, the best I’ve seen from him this season.

The third goal for PSG was a exquisite and the above clip doesn’t do it justice. Di Maria starts the move after a trademark long ball from David Luiz (who was superb) and Paris calmly move it around the box culminating in an absurd lobbed finish from Di Maria. It was top-class football, and I just unfortunately don’t see Cavani being able to contribute to such a move, even if he still has his scoring boots.

Lucas was hauled off for Ezequiel Lavezzi in the 72nd minute but not before contributing to a fantastic, but ultimately offside, chance that was pure combination between the forwards. This sort of interplay is what makes the likes of Lionel Messi, Neymar, and Luis Suarez so deadly; Lucas is hardly in that class of players at the moment, but a little more consistency and he certainly could be. He is only 23, after all. It’s games like this that will build him a future at the club, and it’s players with his technical ability that will ultimately serve this team better than an in-the-box striker like Cavani.

In terms of defensive observations, Caen broke on the counter occasionally, though Thiago Silva and Luiz are generally very good at making chances difficult to take. Maxwell found joy getting forward as high as Aurier does, but he also left a big hole since Di Maria doesn’t drop back to cover as much as Lucas does. Layvin Kurzawa is probably better suited since he’s got a bit more pace on him. Luiz continues to be among the best ball-playing center-backs in the world. The other headline, of course, will be Silva conceding a penalty—soft call, but admittedly fair, and a strange misstep from the captain who was otherwise brilliant—and Kevin Trapp’s subsequent penalty save. I feel confidence from the spot for the first time in a good while, since Salvatore Sirigu couldn’t save a penalty to save his life. For me, the German is still undisputed starter. Solid game from him.