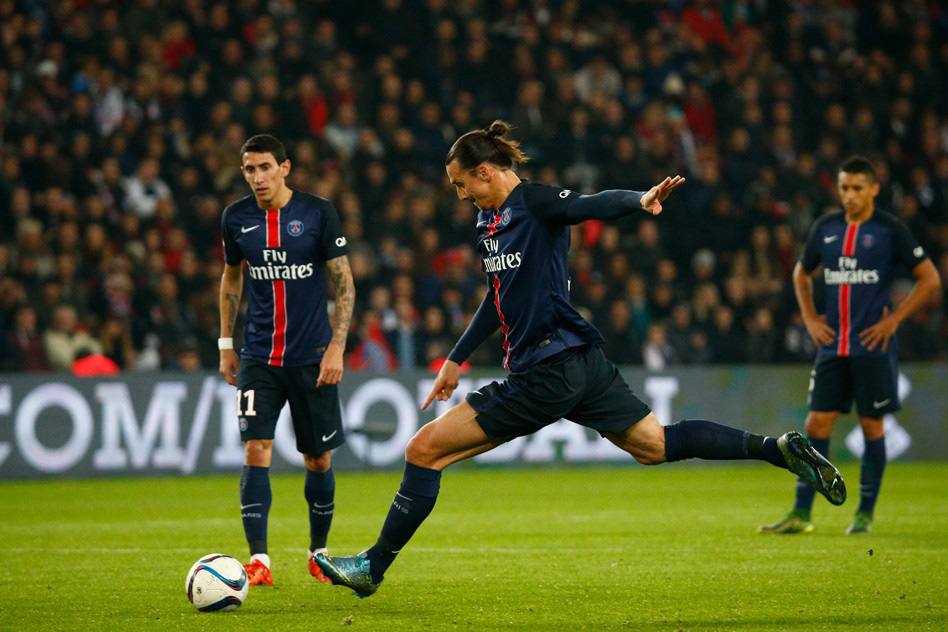 It’s been an eventful year for Paris Saint-Germain, one filled with a record number of trophies and memorable moments. With 2016 right around the corner, we thought we would look back at some of our favorite goals from PSG’s historic year.

In no specific order…

Javier Pastore vs. OGC Nice
We start off with this beauty from the Argentine. He juggles the ball in the box like there’s no one around and then fires a shot on goal. Such skill would be difficult even on a PlayStation. Watch this goal and it’s easy to see why Eric Cantona labelled him the best player in the world.

Blaise Matuidi vs. Olympique de Marseille
Paris found themselves down two goals to their rivals from the South and were in desperate need of inspiration on the road. The man who has come to be referred to by fans as “Big Bad Blaise” stepped up and scored this stunner with a perfectly finessed shot with his weak foot. The goal, which stunned even the player himself, will surely be remembered by PSG supporters for years to come.

Zlatan Ibrahimovic vs. Caen
No top 10 list is complete without Zlatan. Just when you think age has finally caught up with the Sweden international, he scores a goal like this to remind you just how great he truly is. After the goal, Ibra took off his shirt to reveal 50 temporary tattoos, each one representing the name of one of the 805 million people who go hungry worldwide. A yellow card well deserved if you ask me.

The next two goals came in arguably the biggest game of the year. At Stamford Bridge, Paris faced Chelsea in the return leg of their round of 16 Champions League matchup.

David Luiz vs. Chelsea F.C.
The ex-Chelsea man scored this extraordinary goal in the dying minutes of the match to send the game into extra time (and validate his €62 million price tag).

Thiago Silva vs. Chelsea F.C.
Arguably at fault for both of Chelsea’s goals, the captain made up for his errors by scoring the goal to send Paris through to the quarter-finals with this looping header.

Ezequiel Lavezzi vs. Stade Rennais F.C.
In a season where PSG lacked inventiveness, this Barcelona-esque move ending with a brilliant roof finish by Lavezzi was one of the bright moments.

Ezequiel Lavezzi vs. AS Monaco
It’s a bit funny that Lavezzi makes his second appearance on our list given his reputation for not being a clinical finisher in front of goal but his movement and exquisite finish, combined with Angel Di Maria’s vision, make this goal a beauty. It was Di Maria’s assist in particular that caught my eye and gave PSG supporters a glimpse of things to come after the Argentine’s long transfer ordeal from Manchester United.

Angel Di Maria vs. FC Nantes
The Argentine met a beautifully placed pass from Pastore with twirling chip over the keeper and into the net. It’s creativity like this that has seen many argue that Pastore should have a spot in the Laurent Blanc’s starting XI.

Layvin Kurzawa vs. ESTAC Troyes
Last but not least is this amazing goal scored by new arrival Layvin Kurzawa, who already has scored more goals than Lucas Digne who is on loan at Roma. Kurzawa is quickly showing the Parisian faithful why he’s so highly rated and is making the imminent departure of Maxwell look less frightening.

Zlatan Ibrahimovic vs. Caen
Zlatan was up to his old tricks in the final week of the season against SM Caen with this absolute cracker of a goal. The big Swede ran onto the ball just outside the box and sent a perfectly rebounded effort straight into the back of the net, leaving the goalkeeper rooted to the pitch. The ball was clocked at 60 mph, a truly astonishing number even for Zlatan.

Did we miss your favorite goal of 2015? Let us know in the comments below or tweet us a video of your goal of 2015 @PSGTalk.